When you think of cannabis, chances are you think of someone smoking a joint or firing up a bowl.  However, there's more than one way to skin a cat. Throughout the world there is a growing movement to embrace a more health-conscious lifestyle, leading many people to search for different ways of ingesting cannabis.

And for an increasing number of consumers, edibles are the answer.

ArcView Group sees the cannabis edible market quadrupling in the next 3 years, reaching an enormous USD $4.2 billion by 2022. A large factor leading the group to reach this figure is Canada's burgeoning legalization of edibles slated for October this year.

Unlike smoking cannabis, which can introduce harmful toxins and carcinogens into your lungs, edibles provide many of the same benefits in a healthier manner. As they also contain vitamins, minerals and antioxidants in addition to their relaxing effects, it's easy to see why edibles are becoming such a popular choice.

Many celebrities are also endorsing edibles, such as Whoopi Goldberg, Mike Tyson, and professional skateboarder Matt Miller, who we recently interviewed about his use of CBD.

So let's take a look at why an increasing number of people are taking a bite out of edibles.

There's one main distinction between edibles that you'll want to be aware of—the differences between CBD-isolate, marijuana-derived and full-spectrum edibles.

To put it simply: do you want to get high or not?

If the answer is no, but you still want the benefits of CBD, then you'll want to find some CBD-isolate, or full-spectrum CBD edibles.

CBD isolate edibles are as the name suggests: Pure CBD. This means that all other cannabinoids, including THC have been stripped from the extract leaving nothing but CBD behind.

Because of their non-existent THC content, CBD-isolate edibles are typically preferred over full-spectrum edibles for those that have to face drug tests regularly at work.

Though generally speaking, these cases are quite rare. As long as the CBD is hemp-derived and has THC levels less than 0.3%, full-spectrum CBD is legal in pretty much every U.S. state.

And, as we mentioned earlier, Canada is set to legalize edibles in October, one year after they legalized cannabis, which will be a big boom for the edibles market.

Though it hasn't been all cookies and brownies for the edibles industry, as it appears legislators did not foresee the boom in CBD-based edibles, following the passing of the 2018 US Farm bill.

The Farm Act legalized hemp cultivation, which supercharged the CBD industry. However, because of CBD's rapid entrance in to the market, regulatory bodies have had little chance to give it the legal green light. Despite this, restaurants and cafes have been touting CBD as the next superfood and are already incorporating it into drinks, meals and desserts.

While evidence does seem to suggest there are copious health benefits to CBD, states such as New York, Ohio and Maine are putting their feet down on the edibles craze. Restaurants and cafes in these states are receiving warnings, fines and seizures of their CBD products, with a New York official stating that, "restaurants in New York City are not permitted to add anything to food or drink that is not approved as safe to eat".

"Until cannabidiol is deemed safe as a food additive, the department is ordering restaurants not to offer products containing CBD," the official said.

This has put a bit of a spanner in the works for those in these industries who've incorporated CBD products into their menus for years.

Though this hasn't entirely slowed the breakneck pace that the edibles industry is expanding at. As we've discussed before, more and more evidence is emerging surrounding health benefits of CBD, which is why the compound is making waves across the wellness industry.

Isolate CBD products are even beginning to receive serious attention from professional athletes such as skateboarder Matt Miller—due to their analgesic (pain relieving) and anti-inflammatory properties—and even the UFC are looking towards CBD as their next supplement.

On top of this, isolate-CBD edibles won't have an adverse effect on your short-term memory or cause anxiety in their users, because they don't contain THC. Without the psychoactive effects of THC, isolate extracts are often considered to have much less capacity for addiction.

While CBD-based edibles have their benefits, many believe they lack what is known as the "entourage effect".

And if you want to experience the entourage effect firsthand, then you'll need to try full-spectrum edibles. Full spectrum edibles contain the entire gamut of the marijuana plant – including the THC.

Though don't worry; if the edibles are hemp-derived, the THC levels will still be too low to get you high. This is why many opt for full-spectrum hemp-based edibles, as they get to experience the entourage effect with only trace amounts of THC.

For those on the other side of the aisle, however, who do in fact want higher levels of THC in their edibles, you'll have to find the old-fashioned marijuana edibles. Though it's worth noting that the high achieved through edibles or beverages is different than when marijuana is smoked.

When smoking marijuana, users will feel it's effects almost immediately. Conversely, users who ingest edibles containing THC can take anywhere between 30-90 minutes to begin feeling the effects. This high can also last much longer than smoking, because THC enters the bloodstream with a slower release when eaten compared to inhalation.

For this reason, people often opt for edibles in scenarios where they want a longer lasting high, such as before getting on a long flight.

Though one must be careful when choosing edibles as their ingestion method of choice, as eating too many is renowned for causing bad experiences. People often suspect the edible hasn't worked because of the slower onset of effects, and find themselves downing another brownie or two.

Couple this with the munchies, and you have a recipe for disaster. Always ensure that you know the THC levels of the edible you're about to eat, and if you don't, play it on the safer side.

Asking for a Friend: How do you make Edibles?

For the individuals reading this that are somewhat culinary-inclined, edibles are relatively simple to make at home. Again, the first thing you'll want to do is ask yourself whether you—and presumably the others you're cooking for—want to feel the psychoactive effects.

If not, you simply have to add CBD oil to whichever recipe you wish to bake. Usually the CBD oil used is one that is infused with fat or another oil such as coconut or MCT oil.

Because CBD isn't psychoactive, you don't have to be as stringent with the dosage as you might be with a THC edible. That being said, it's always better to know how much you're taking.

If you're looking to make edibles that contain THC, the process is a bit more lengthy.

Firstly, you'll want to have a decent amount of marijuana, as just a gram or two won't yield the necessary effects. Though depending on your tolerance and the strain you use, you may end up having to do a bit of trial and error to find the right amount for you.

You'll then want to decarboxylate your plant. Decarboxylation refers to when you heat up marijuana to roughly 105 degrees celsius, which activates the plant's psychoactive effects. To do this, grind and then lay out your marijuana on a tray with baking paper as flat as you can, then put it in the oven for 30-45 minutes.

The marijuana should be dry and slightly browned, so keep an eye out for when it reaches that stage. Once this is done, you've awoken the beast; your plant is now psychoactive. Then you'll need to boil some water, add sticks of butter, and then introduce the decarboxylated plant matter into the mix over a low heat. People will typically leave the butter for up to 3 hours before mixing it into a different recipe to be baked again (pun slightly intended.)

You can then put your freshly made cannabutter atop a big bowl of popcorn, into brownies, cookies, or any other sweet that you'd like to bake.

Hungriest Players in the Industry

You can bet your bottom dollar that big corporations already have their eyes on the edibles market, and are hungry for a bite. Though it isn't all brownies and cookies, in fact they appear to be just a slice of the overall market.

One of the most notable forays into the cannabis edible space is Canada's finest, Canopy Growth Corporation (TSE:WEED) who received USD $4 billion from Constellation Brands—the makers of Corona and Modelo beer—to develop cannabis themed beverages. Zenith Global predicts that cannabis infused drinks will grow to over $1.4 billion by 2024—fifteen times the amount of cannabis drink sales in 2018.

Following the CBD beverage trend is also Molson Coors Brewing Co. (NYSE:TAP) which recently went into a joint venture with HEXO to create a line of CBD-based beverages in Canada

If you want some gummies, specifically lower dose ones, then look no further than Plus Products Inc. (CSE: PLUS), who've managed to become the #1 gummies brand in California with a 25% market share in 2019.

And lastly how could we forget MedMen (CNSX: MMEN,) the most recognisable cannabis brand in the US. With 84 potential retail licenses, across 12 States—and boasting more than 2 million recreational transactions to date—MedMen is one of the largest MSO's in the US.

MedMen is starting to stock an increasing array of different cannabis edibles, and many are predicting that it will soon become the "Starbucks of Weed." As the company is already selling gummies, cookies, chocolates, beverages, and of course brownies, it's hard to look past them.

Take a Slice of the Edibles Market

While many focus upon smokeables as the centre of the cannabis industry, there's definitely room for growth in the edibles aisle.

As the growing trend towards health and wellbeing continues, smoking rates will continue to decline. Since 1965, there has been a 67 percent decrease in everyday smoking, which will undoubtedly play a role in people's minds when they choose to ingest cannabis.

Even if it is much healthier than tobacco, carcinogens are carcinogens, and people will increasingly want to steer clear of them. And when they do, where will they turn?

The answer of course, is to edibles and extracts. Eagle-eyed Investors may want to get a slice of this industry sooner rather than later, and capitalize on the upcoming boom that legalization 2.0 is sure to bring.

You've learned about edibles here, but keep your eyes on The Green Fund this month as it's Extracts, Edibles and Concentrates month – so there'll be plenty more to come. 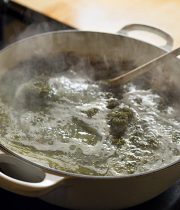