The Future looks bright with an increase of 24% in net revenue in Q1.

Supreme Cannabis' Management Discussion & Analysis ("MD&A") and condensed interim consolidated financial statements ("Financial Statements") for the three months ended September 30, 2020 ("Q1 2021"), along with all previous public filings of the Company may be found on SEDAR at www.SEDAR.com. All figures are in Canadian dollars.

In the first quarter of fiscal 2021, we made solid progress towards our goal of transforming Supreme Cannabis into a premium cannabis CPG companyBeena Goldenberg, President and CEO of Supreme Cannabis

Mr Goldenberg went on to say "We continued to execute on our strategy of accelerating revenue and controlling our costs, which led to sequential growth in consolidated net revenue of 24%. Recreational net revenue grew slightly compared to the fourth quarter of 2020, due largely to higher sales volumes offset by lower average selling prices. Despite an initial drop in recreational sales volumes in July due to stockouts as a result of fulfillment and supply chain growth challenges, we built steady month-over-month improvement in August and September as our sales partnership with Humble & Fume Inc. gained traction. This strong momentum led to September 2020 being Supreme Cannabis' highest month on record for recreational sales. We exercised good cost control across the organization and benefitted from a full quarter of cost savings from the measures taken to right-size the business in the second half of fiscal 2020. This resulted in Supreme Cannabis generating a slightly positive Adjusted EBITDA of $0.3 million."

Ms. Goldenberg concluded, "Supreme Cannabis' performance in the first quarter of fiscal 2021 demonstrates that our strategy is working. While the first quarter of 2021 was a consistent improvement, we understand that more work is needed to become a sustainably profitable business. We will continue to efficiently focus our resources on driving near-term revenue growth in the recreational market. We are well-positioned to increase our market share with compelling brands and high-quality products at several points of value and preference. We have increased our sales and marketing efforts in the recreational segment during the quarter. Our partnership with Humble & Fume Inc. ("humble+fume") has enabled Supreme Cannabis to secure 2,258 new listings during the quarter. We expect the expanded listings to set us up for further recreational revenue growth."

Recreational net revenue rose to $7.5 million, an increase of 3% quarter-over-quarter as a result of existing and new products continuing to be well received by the recreational cannabis consumer. In particular 7ACRES Craft Collective and cannabis extracts, which include oils, vapes and concentrates contributed a growing portion of the recreational sales in the quarter.

In Q1 2021, the gross margin, excluding fair value items, included impairment charges of $8.4 million recorded in production costs. Excluding the impact of impairment charges recorded in production costs, gross margin, excluding fair value items, increased to 53% in Q1 2021 compared to 41% for Q4 2020, mainly due to a realization of cost optimization initiatives the Company initiated in the second half of fiscal 2020.

The Company generated a positive Adjusted EBITDA of $0.3 million compared to an Adjusted EBITDA loss of $4.2 million in Q4 2020 due to an increase in revenue and a higher gross margin, excluding fair value items and the impact of impairment charges.

Supreme Cannabis ended the quarter with a total cash balance of $20.4 million and a working capital surplus of $48.1 million.

During the first quarter of fiscal 2021, the Company significantly strengthened its balance sheet by refinancing its convertible debentures and amending its three year term credit facility consisting of a term loan and a revolving credit facility (the "Credit Facility"). As a result, there are no debt maturities for two years (excluding customary principal amortization payments), and the carrying value of total debt was reduced by approximately $71.0 million on the day of the transaction related to the convertible debt extinguishment. Furthermore, expected cash interest expense was significantly reduced due to the reduction in the principal amount of the convertible debentures and the Credit Facility. The amended Credit Facility defers the financial covenants related to leverage and the fixed charge coverage ratio by 12 months until Q3 2022.

In Q1 2021, the cost realignment efforts resulted in the Company achieving a $9.3 million or 59% decrease in operating expenses, compared to the three months ended June 30, 2020. Operating expenses for the three months ended September 30, 2020 benefited from a recovery of $1.5 million related to share based payments, primarily driven by a recovery of $2.1 million for the cancellation and forfeiture of 10.9 million stock options. The Company has executed on its cost rationalization activities which have led to significant operating expense cost reductions since the start of its efforts during the third quarter of fiscal 2020. The efforts included reduction in staffing levels across all facilities and shared services, the consolidation and streamlining of the Company's facilities and production processes and the curtailment of avoidable expenses.

In addition to reducing its operating expenses, the Company's capital expenditures in Q1 2021 decreased to $0.4 million, down 61% quarter-over-quarter. With the completion of construction projects at the Company's Kincardine, Ontario ("Kincardine Facility") and Langley, British Columbia ("Langley Facility") facilities, capital expenditures for the remainder of fiscal 2021 are expected to be minimal and will be focused on productivity enhancements justified by near‐term cash flow returns.

Brand and Product Developments in Q1 2021.

Supreme Cannabis introduced 10 new SKUs to the market in Q1 2021:

Distribution to the recreational market on a gram equivalent basis was 17% higher in Q1 2020 compared to Q4 2020.

Key to growing Supreme Cannabis' presence across Canada is the Company's sales agency agreement with humble+fume. Through this partnership, humble+fume is deploying a team of sales professionals that will drive distribution, brand advocacy and budtender education for all Supreme Cannabis brands at the store level. Since tracking commenced in April 2020 until the end of September 2020, humble+fume has created over 3,500 new listings for Supreme Cannabis products, including 2,258 new listings in the first quarter of 2021. In the first quarter of 2021, 232 new stores started carrying the Company's products.

Subsequent to quarter-end, the Company entered into a supply agreement with Medical Cannabis by Shoppers Inc., a subsidiary of Shoppers Drug Mart Inc., to offer Truverra-branded medical cannabis products through the Medical Cannabis by Shoppers™ online sales platform accessible to patients across Canada. Under this agreement, Canadian patients will be able to order Truverra dried flower, pre-rolls and full-spectrum CBD oil. Included in the offering is the Jean Guy strain, which is a tribute to the legendary variety offered by the Montreal Compassion Club.

The Company continues to make incremental improvements at its core facilities in Kincardine, Ontario and Langley, British Columbia, to enhance production, processing and operating efficiency.

The continuous improvement program at the Langley Facility continues to yield positive results. A key focus has been on improving conversion yields through first-pass extraction and distillation and further enhancing quality in these processes.

The Company remains confident in its ability to grow near-term revenue and reach sustainable profitability based on its accelerated transformation into a premium Cannabis CPG company, its streamlined and right-sized operating structure, and its enhanced offering of new high-quality brands.

For the latest news and updates on The Supreme Cannabis Company, click here

Mark is a UK born investing enthusiast based in Sydney. He has a keen eye for technical analysis and is paying close attention to the ongoing legalisation of cannabis for the health benefits, opportunities, and emergent industries that will follow. 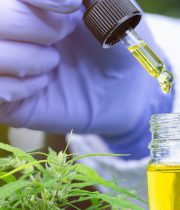 Zelira and Emyria Team Up to Tackle Autism Using Cannabis