Richard DeLisi, charged with trafficking cannabis in the 1980s, will be spending the holidays with his family for the first time in 30 years.

71 year old Richard DeLisi is set to be released from prison just in time for the holidays after serving over 30 years of his 90 year sentence. Thanks to the work of The Last Prisoner Project, a nonprofit advocating for prisoners serving overly long sentences for non-violent marijuana offences, DeLisi can return home and rebuild his life.

Richard and his brother Ted were convicted under the RICO Act in 1989 when they trafficked cannabis in Polk County, Florida. Beyond reasonable judicial guidelines, the judge sentenced both brothers to three consecutive 30 year sentences. While Ted managed to appeal his conviction and was released in 2013, Richard wasn't so lucky until now.

A large part of his DeLisi's recent fortune is ironically owed to his various health problems including chronic obstructive pulmonary disease, asthma, hypertension and diabetes. As of writing this article, around 180 Florida inmates have died of COVID-19 relate complications. Furthermore, the private prison South Bay Correctional specifically where he's been held has reported over 500 positive cases for the virus among both inmates and staff.

Because of this doctors and lawyers working with The Last Prisoner Project argued that if DeLisi contracted the virus in prison he would not survive due to his chronic obstructive pulmonary disease, asthma, hypertension and diabetes among other health problems.

It is my expert opinion, based on my education, training, certification, skills, and experience, that within a reasonable degree of certainty if Richard DeLisi is not released, he will contract COVID-19 in prison and within a reasonable probability die as a result,"Dr. Karen Gedney

While serving his sentence in the private prison, DeLisi cited only five minor infractions over 32 years with the most recent being a telephone violation in 2005. Behind bars he watched his parents, wife and son pass away while having five grandchildren he's never seen. His clemency application included letters of support from family, childhood friends, inmates and prison staff recommending his release with the latter describing him as "a model inmate'.

It feels amazingly wonderful to know that I will be home with my family and loved ones very soon, I am grateful to everyone who has been there and helped me along in these long years. If I could go back to 1988 I would tell my former self to put more value in the time I spend with my family. I have learned that money is something that comes and goes but family is forever."Richard DeLisi

It's estimated that the state of Florida has spent more than $1.6 million to keep DeLisi behind bars as it usually costs $70 grand to hold an inmate over fifty despite being held in a private prison. In 2018, more than 70 people were serving life sentences for marijuana convictions that did not include violence.

Now, Richard is expected to stay with his sister in Fort Lauderdale and he's overjoyed to meet his daughter Ashley's family, who was only 3 years old when he began his sentence. It'll be the first time he's spent the holidays with his family in over 30 years.

I am so excited to hug my children and grandchildren, I have missed so many important moments with them and I can't wait to get out there and create precious memories with everyone. I am so thrilled that this dark chapter of my life is finally over."Richard DeLisi via his legal team

DeLisi credited The Last Prisoner Project for "having a definite impact" on hastening his release. They're currently fielding public donations to help with DeLisi's reentry into society as well as to fund further efforts to see nonviolent offenders serving life sentences find clemency. 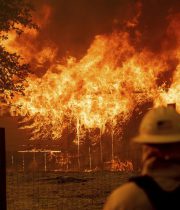