The University of New Mexico recently completed a study investigating the short-term effects of cannabis on the symptoms of depression. Here's what they found.

The use of cannabis for the cessation of depression and depressive symptoms is a contentious topic amongst researchers. While there is plenty of anecdotal evidence out there to suggest that people often use cannabis to help manage their depression, there is conflicting clinical evidence in regards to this association. Some studies find that cannabis can alleviate depressive symptoms while others suggest that it exacerbates them.

In a new study, researchers from the University of New Mexico observed 1819 people who completed 5876 cannabis self-administration sessions using the Releaf App. Their goal was to measure the real-time effects of cannabis consumption (specifically cannabis flower) and its effectiveness in relieving the symptoms of depression. The study is titled 'The Effectiveness of Cannabis Flower for Immediate Relief from Symptoms of Depression' and was published in the Yale Journal of Biology and Medicine.

This study was conducted using de-identified user data, provided by the owner of Releaf App. The Releaf App is a mobile software application that was designed to help users manager their cannabis consumption and monitor any 'real-time' changes in the intensity of their symptoms and side-effects.

Once product information was collected (e.g. product type, cannabis species, combustion method and THC/CBD content), participants were prompted to specify a starting symptom intensity level (on a 0-10 on a visual analogue scale), record any cannabis consumption, update the symptom intensity level, select from a range of side effects and end the session.

Interestingly, higher THC levels (in the cannabis flower) were associated with greater symptom relief, while higher CBD levels were not statistically significant predictors of symptom relief. Despite this, higher THC levels were associated with the decreased reporting of positive side effects, indicating that balance is crucial.

Other interesting findings were that there was no statistical difference between products labelled indica, sativa or hybrid and that symptom relief did not vary with combustion method. Compared to consumption via smoking a joint, vaping cannabis was associated with a decrease in reporting positive side-effects.

What's the significance of these findings?

By using the Releaf App to record cannabis consumption (including cannabis type and consumption method), this study made it possible to measure whether dried cannabis flower could immediately affect the intensity of depressive symptoms. They were also able to deduce which product characteristics were associated with the strongest effects.

Their findings suggest that there are potential benefits from the use of cannabis as an antidepressant, however, the effectiveness and side effects may vary across different types of cannabis flower and cannabinoid (e.g. THC and CBD) potency levels.

Cannabis flower products with relatively high THC levels were the strongest predictors of symptom relief and expected side effects but these benefits can reach a plateau. Products with a THC range of 10-35% offered greater relief than products with a THC level lower than 10% but there wasn't much variation between products in this range (10-35%).

It is important to note that depression is a major health concern and is the leading cause of disability worldwide. Currently, the frontline treatment for depression is a combination of cognitive behavioural therapy (CBT) and pharmaceuticals such as tricyclic antidepressants, monoamine oxidase inhibitors (MAO-Is), selective serotonin reuptake inhibitors (SSRIs) and benzodiazepines (less common).

While all of these medications are effective in reducing depressive symptoms, they only begin to take effect after several weeks (5-6 weeks in the case of SSRIs). This means they are fairly useless to those in need of immediate relief from depressive symptoms, such as those who are dangerously ill or at risk of harming themselves.

A lot of these medications also come with severe side-effects or intolerable withdrawal symptoms. Some of these include weight gain, agitation, anxiety, suicidal ideation, anorgasmia and demotivation.

The hope is that dried cannabis flower can not only provide immediate relief for those in need, but that it can also be an alternative therapy when the aforementioned antidepressants do not achieve the desired result.

In addition to this, there is already a well-established association between the use of cannabis during adolescence and an increased risk of developing depression in adulthood. With this being the case, it is imperative that further research is conducted on the long-term effects of commercially available cannabis products (in adolescence or otherwise) and what impact they can have in alleviating or exacerbating depression.

Future studies will also investigate these effects compared to and in conjunction with conventional antidepressant treatments, such as the ones mentioned earlier.

Despite the need for further research, the positive effects of this study cannot be overstated. The most clinically significant finding from the study was the widely experienced relief from depression within 2 hours or less.

With traditional antidepressant medications needing several weeks before they become effective, cannabis could fill an important clinical gap, thanks to the short-term relief it provides from depressive symptoms. This could lead to new options in the treatment of an illness with a significant burden and one that is becoming all too common. 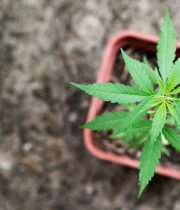